How can we help you today?

Small Block Chevy - What is a D-Port Cylinder Head Print

It is important to understand the exhaust port shape on small block Chevy cylinder heads, specifically when it comes to header selection. With so many OEM and aftermarket cylinder heads available for these engines, the exhaust port shape can vary dramatically. In most cases this is not an issue. Round port, square port, something in-between, it really does not matter as long as the header flange seals properly to the cylinder head. Of course, those with race-only applications may want an exact match between the port and header. However, most of the time this is a non-issue, and will provide little to no benefit on the street application, hot rod, cruiser, or even many street/strip engines.

The problem here, is that the customer does not have D-port cylinder heads---they have cylinder heads with d-shaped exhaust ports. Looking at the slightly exaggerated image below, it should be clear how this might be confusing. The D-Port roof extends well above the center line of the exhaust port, whereas the D-shaped port fits nicely inside what is deemed a standard port dimension. 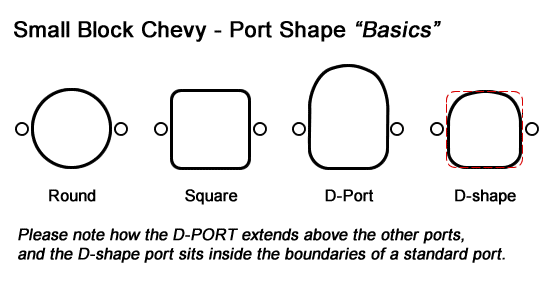 Added confusion occurs with some cylinder heads that have exceptionally large exhaust ports and also have a very pronounced D-shape, but does not quite fit the definition above. One example is the Pro-Filer 176 head shown below. Is this a D-Port or D-Shape? In this example, either a large port flange or a D-Port flange could work---as long as the header flange seals properly. The concern would be whether or not enough machined surface area exists above the port. The top of this port does not extend far above what would be described as a large square port. Additionally, Pro-Filer does not state anywhere in their documentation that this is a D-Port exhaust, what the port dimensions are, or what specific gasket to use with them.

Did you find it helpful? Yes No

Send feedback
Sorry we couldn't be helpful. Help us improve this article with your feedback.